It's one of my favorite weeks of the semester. Demonstration speech week. My kids must choose an activity that they love to do and show the rest of us how to do it.  I learn a lot during this time. In the past I have learned:

Thursday and Friday were rehearsal days. I'm exhausted after these days because I have kids EVERYWHERE in the building--the wrestling room, the auditorium, hallways and empty classrooms. I'm always running around the building. In the fall, I'm often outside too.

It's winter in Iowa. And sometimes, we take rehearsals to the streets, as they say. So when one of my students was practicing with his partner on the proper way to put on the A&W bear costume

Well, we decided to brighten a winter day in the high school with a little walk around the building. Kids and teachers came out of classrooms to see what was going on. There were a lot of sad faces when they realized he wasn't handing out root beer floats! 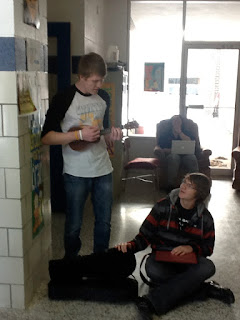 He gathered quite a crowd and made 50 cents in the process. Later in the day, we took his show on the road too. He sang and danced his way around The Fountain's Spanish class! Here's a little taste of his campy "TipToe Through the Tulips" ala Tiny Tim (he really does sing better than this. But it will bring a smile to your face)


And how was your week?