The Slice of Life Challenge

This is a repost of a slice I wrote last February. I was going to write a new one this year about why teachers should join this challenge, but I said it best with this.

Writing for me was always a private act. I kept journals and diaries and wrote my life. I wrote poetry. I composed short stories and the beginnings of novels, sometimes in my head, sometimes on paper.

But I never, ever shared.

But they never, ever shared.

I can honestly say I am a better writer and a better teacher of writers and readers than I was at this time last year. I take chances with my own writing and in my classroom that I wouldn't have taken before last year.  I encourage myself and my students to play around with words, to discover new genres, to build on their skills (thanks, Ruth for Discover. Play. Build.)

My personal writing is stronger because of the audience I write for.  My students' writing becomes stronger because of the audience they write for. Google Docs makes sharing easier, but it was Stacey and Ruth and the rest of the teachers I met through Two Writing Teachers that taught me the value of sharing, conferring and critiquing each other's work.

I look forward to seeing you. Join us. Take the plunge. Break out of your comfort zone. Try something new (Here's link to get your started! Gearing Up for the SOLSC).

"Fill your paper with the breathings of your heart."
William Wordsworth

Email ThisBlogThis!Share to TwitterShare to FacebookShare to Pinterest
Labels: #slice2013 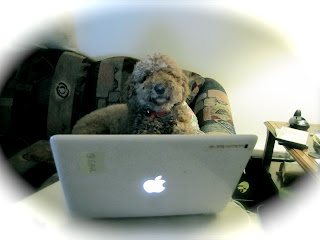 "What's up?" I think, as I lift my head. "Someone's here. It can't be Mom or Dad, it's still light outside."
I decide I'd better check this out, so I slowly stand, stretch, and sniff as I make my way to the door.

It's her! It's her! Mom's home. I'm so excited I begin my happy dance in the kitchen. Mom puts down all her bags and gives me a big hug. I just wiggle all over I'm so happy.

And then, the best thing of all.

Mom changes her clothes and says WE'RE GOING FOR A WALK!

We haven't gone for a walk in a long time--not since, well, I really don't remember. She gets my leash and out the door we go.

I grab the leash in my mouth and head out on our usual path. I don't know what takes her so long, or why she walks so slow. I swear if I didn't take the leash, she'd never get out of the yard.

Anyway, once we finally get going, it feels really good to be outside and out of my yard. I really tug on the leash to get Mom moving a little faster. Doesn't work though.  She just doesn't understand all the things I have to check on while we walk.  There have obviously been some strange dogs and cats on my route. I can smell them all over the place. I wish I could meet some of them sometime. They smell pretty interesting. I bet we'd make good friends.

I also have to check out these rabbit tracks. They're starting to move back into the neighborhood. Can't let that happen 'cause they eat my apples. I hate it when they do that. Oh, oh, oh---I smell that squirrel that comes into my yard, sits in the tree and makes fun of me. I'll show him. When we get home, I'm going to try and dig up all his walnuts. That'll show him.

Gee, it feels so good to walk. Maybe Mom's right and I should slow down a little bit. If I go too fast, we'll get home too soon and then I'll have to stay in the house and I don't want that. It's too nice a day to stay inside.

Someone else's student teacher sat in my room today and observed my classroom. And you know how it is when anyone observes your classroom. You second guess yourself. The little critic in my head kept talking

Am I explaining this enough?
Do they understand what I want?
Is this going well?
Are they really trying?
Oh my God, they're talking again!

But the student teacher and I talked about what I did in class. And the things I know deep down, but never articulate, came out.

The boys. They talk. They joke. They laugh. They argue. They're loud.

It looks like they are wasting time and just messing around.

Something happens in that time. Ideas form. Words are written.

And so when you walk into my Creative Writing class and see that the girls are reading mentor texts and, oh so carefully, writing practice drafts. When you look and see the boys giving each other crap, arguing the rules of LARPING (don't ask), and laughing about their latest escapade, don't assume that they aren't getting anything done. Wait until you read what they write!

Sometimes my problem with an
online presence
is that I can't
anonymously
say what I want. I can't
rant and rave and
scream and yell and
cry and whine
about the happenings in my world.

I have to step back.

I have to look at my words
professionally,
ethically,
humanly.

I have to test them.
Feel them
Live them
Before I send them
Out into the world.

And sometimes,
That isn't enough.
Even now
Some will think
These words are about them.

Posted these thoughts on my blog for my English classes. Thought I would share here too.

3.87  ·   rating details  ·  389 ratings  ·  159 reviews
Tim Macbeth, a seventeen-year-old albino and a recent transfer to the prestigious Irving School, where the motto is “Enter here to be and find a friend.” A friend is the last thing Tim expects or wants—he just hopes to get through his senior year unnoticed. Yet, despite his efforts to blend into the background, he finds himself falling for the quintessential “It” girl, Vanessa Sheller, girlfriend of Irving’s most popular boy. To Tim's surprise, Vanessa is into him, too, but she can kiss her social status goodbye if anyone ever finds out. Tim and Vanessa begin a clandestine romance, but looming over them is the Tragedy Paper, Irving’s version of a senior year thesis, assigned by the school’s least forgiving teacher.

Jumping between viewpoints of the love-struck Tim and Duncan, a current senior about to uncover the truth of Tim and Vanessa, The Tragedy Paper is a compelling tale of forbidden love and the lengths people will go to keep their .  Goodreads Review
I bought this book after seeing a blurb on Amazon that said it was for lovers of Looking for Alaska by John Green and 13 Reasons Why by Jay Asher. How could I not buy it?  Those are two of my favorite books!
And you know what? I really enjoyed this book. I am a big fan of dual narratives. You know, those books that have more than one narrator. It seems I learn so much more about characters that way. I'm one of those people who wants to know what other characters are thinking. I became invested in Tim's story. I wanted to know if he ever got with Vanessa. I wanted to know how he was connected to Duncan. Duncan seemed so affected by The Game from the previous year. I had to know how he was involved.

The other thing I enjoyed about this book was its simplicity. It didn't have major violence, sex, or drugs. To me, the "love triangle", the romance, was secondary. It was just a good story, with characters I cared about and a little mystery that I wanted to know more about. And sometimes, that's enough.
Posted by Deb Day at 9:05 AM 2 comments:

As most of you know, I read Penny Kittle's Book Love over break and participated in the Facebook group conversation. It was an amazing professional development opportunity. I always thought I was pretty good at getting books into the hands of my students, but I am so much better now!  That 10 minutes a day just blows my mind. And my students are reaping the benefits--they're reading!

Thank you, Penny Kittle (she commented on my blog piece too. Feels like I've been visited by a ROCK STAR!)

How do I know (besides the record we keep of pages read)?  They tweet them out.

How do you like that? A student thanking me for getting him to read. So far, in the four weeks we've been back to school, this student has read Revolver by Marcus Sedgwick, Twisted by Laurie Halse Anderson and Looking for Alaska by John Green.  Isn't that amazing?

Now I am on a continual hunt for books. My book gap is books for guys. Although I have many in my room, I haven't read as many of them as I should.  I'd better get going on that. I think these boys are going to keep me busy.
Posted by Deb Day at 1:25 PM 8 comments: 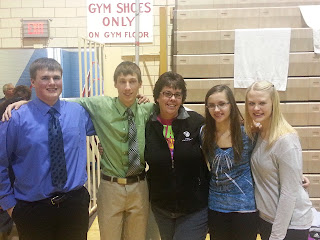 This is my freshmen improv team after they received a Division 1 rating at state speech on Saturday. They are some of the bravest kids I know. Not brave in the sense they faced danger...no armed gunmen, they didn't save anyone's life, didn't run into burning buildings.

They faced their fears, not once, but twice. Both times they proved to themselves they could do something that made them so nervous, they weren't sure they could go through with it.

Group Improvisation works like this. Your group walks into the performance room and draws three random situations. You have two minutes to choose one and develop a scene from it. Then you have five minutes to act it out. Trust me when I tell you, this is not easy.

Oh, it's easy and fun in my classroom after school with lots of other improv kids sitting around. But when you have to go in front of 100+ strangers and do this, not so easy.

They made it through district competition with a scene about wrestling alligators. I wasn't sure what would happen once they got in the room. Their nerves were either going to help them or hurt them. That's the thing with improv. Sometimes the nerves freeze your brain and nothing comes out. Other times, the nerves get you thinking, "Oh, what the heck."

So that became the mantra. "Wrestle the alligators."

I gave them lots of things to work on in practice. Sometimes I wondered if I was being too mean, too tough. I pushed the girls. especially, to leave their comfort zone (do you remember being 14/15 years old? Your comfort zone is important).

Yesterday, they were nervous, but not as nervous as districts. My other speech kids found seats to the front and their families were there. I asked them if they wanted me to stay in the hall with them until they went in. The most nervous told me to go ahead and go in.

The last thing I said--"Remember to wrestle the alligators."

It was probably the best improv they have done since November. Not perfect. But good enough for a Division 1 rating.

But that's what you get when you wrestle alligators. The confidence to face your fears.
Posted by Deb Day at 6:41 PM 4 comments: