Looking at the Heart

As always, my writing mentors speak to me just when I need to hear them. 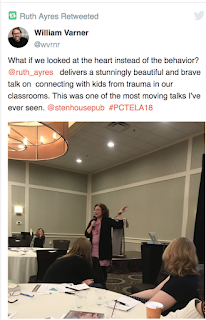 Scrolling through Facebook, I came upon Leigh Anne's post (notice I stole her title) reflecting on Ruth's post.  There was a tweet included with Leigh Anne's and those words went straight to my heart because like Leigh Anne, I felt I had been focusing on behaviors instead of hearts.

She's a special ed teacher. An amazing one.

She's a regular ed teacher also. An amazing one.

And many of the students she works with have behavior issues. And there are regular teenagers who have their own issues. In the stress of starting in her classroom, in the hurriedness of catching up, in finding my "teaching every day" mojo, I forgot to look at the hearts.

I let behaviors get to me.

I thought back to a conversation I had with a friend one day about a certain student. I told her how I was having a difficult time with a kid. And in describing what was going on, I realized that I was the problem.

Then the new boy came. I'm really trying to connect with him and make his first days more comfortable. And another new boy started and he was so nervous he didn't make it to class. Then there's the new boy from last year who is so angry. That anger comes out in sarcasm and meanness. He's tough. He's hard. And in thinking about those boys, I knew I'd have to deal differently with all the others. I had to quit being the problem.

So, I'm going to keep the words on "my" desk so I see them every day because even experienced teachers need reminders...


What if we looked at the heart instead of the behavior?

10 Things I'd Rather Do Than Write
1. Play Facebook games
2. Take a bath
3. Read my book
4. Take the polish off my toenails
5. Eat ice cream
6. Make phone calls
7. Check my snapchat and instagram
8. Doze in my chair
9. twiddle my thumbs
10. Prepare for classes tomorrow