Showing posts from July, 2012
Show all

I Don't Wanna, and You Can't Make Me

Chloe and I enjoy wonderfully lazy mornings at the lake.  I usually wake up to her sleeping at the foot of my bed. She lifts her head as if too say, "It's too early to get up", then crawls up and snuggles in against me for some cuddle time. Many mornings I wouldn't need a shower because of all the puppy kisses I get (well, if I was a dog). This morning was typical. After cuddle time, I started the coffee and took a shower, while Chloe was outside. I watched some Olympics, read and commented on a couple of blogs, checked my Twitter and Facebook. Feeling a little guilty, I went outside with a cup of coffee to see how Chloe was doing. She didn't get up when I sat down. Laying in the shade, she was keeping track of all that was going on in the resort. Chris was raking the beach, Larry was outside having coffee, kids were on the swing.  Things were as they should be. Eventually, I thought we should go for our walk , as we do every morning. Best to get it done be
11 comments
Read more

A summer full of little things.  I start many blog posts in my head. Put things in my Smash notebook (check out the link if you don't know what a smash book is. These could be my new writer's notebooks). But nothing seems "blogworthy". I don't know why. I keep thinking I need to write about amazing events or have incredible thoughts or share inspiring ideas, so when I don't have those things, I don't write. Or maybe I'm just writing lazy this summer. I'm leaning toward the lazy. Last school year was tough--don't get me wrong, I'm not talking bad classes or bad kids.  I taught seven out of eight periods. Not so bad, except there was lots of writing going on in three/four of them, which means there was LOTS of reading and commenting going on for me. I couldn't get everything done in my 45 minute prep. And sometimes, after I got home after speech rehearsals, I was just too tired to do anything but have a glass of wine and watch mind
10 comments
Read more

It's That Time of Year Again 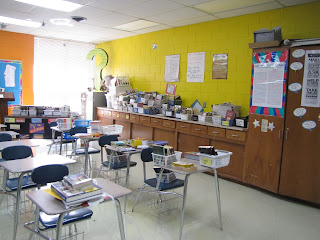 "So, what do teachers do all summer, Mrs. Day?" "Well," I replied, "I don't know about the rest of them, but my husband and I have a little trailer on Spirit Lake and I have spent most of the summer over there.  Over the 4th, when it was so hot everywhere, I sat in the lake." "Ahh. Sounds nice." And, it is nice. I have had a truly relaxing summer. I've read a lot of books. Played a lot of games on my computer. Swam. Golfed. Went to a couple of great concerts. But in four short weeks, I'll be back to school. The counter and my desk are full of baskets of books... So today I went up to my room.  I knew the custodians had taken all my baskets off the shelves of my bookcases. I told them not to worry about putting them back because I wanted to sort through them and arrange them myself. So, here is what my room looked like at 9:30 this morning. The shelves are empty. So, I rolled up my sleeves (figurat
9 comments
Read more

July 09, 2012
It was hot in Iowa last week ( I know. It was hot in other places too). According to a former student's Facebook status, it was hot enough for a pork chop to cook on the dash of your car in a couple of hours (trust me, you don't want the details.) There was a heat advisory/warning from 1:00pm Monday until 7:00pm FRIDAY. That's a long time.  And it was hot. So hot, that there were only two places to be---in the air conditioning somewhere or IN THE LAKE. We chose the lake (sorry, no pictures. We had way too much fun and the camera isn't waterproof). Now the beach is right across from our little trailer, so Kaylee and Tony can go to the water and swim and we can sit at the table under the shade of the umbrella and watch.  We fill up the baby pool for Max to play in. I get a lot of Maxspeak while his dad is filling it up. I'm pretty sure he was asking what was taking so long. Chloe and her BFF, Bella, are in the trailer, noses pressed to the window and whining. I
14 comments
Read more
More posts