March 22, 2012
Teaching Speech for the last five years, I have had some odd groupings of kids for class.  There was the class of all high achieving girls and one bad boy. There was the redneck and jock class. But my 8th hour class this semester beats them all.  It's kind of like Noah's Ark for high school classes.

The first group are the Mona Lisa girls who sit towards the back or the side, straight backed They maintain that half  smile at the antics going on. They stay on the fringes of the action, never really participating. A couple of them think they are cool, above the rest, but they aren't nearly as cool and popular as they think. 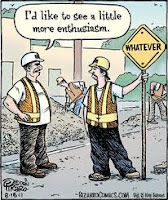 The next group I find hard to name. At first I called them Slackers. But they aren't. They come to school every day (except the first day of each deer season. Did you know in Iowa there is more than one) and they do care. They just don't show it. They sit in the back of the room, slouched down in their seat, chewing their gum. They have a smirky smile on their face and a twinkle in their eye, like they just got away with something sneaky.  I have had them in class before and know their tricks. They don't get by with much.

There are my special ed kids. The girls sit in a corner and laugh and giggle at whatever the boys in this group say. One of the boys loves to flirt and talk to them and get them giggling.  The other boy just likes to fish.

And last, but certainly not least, my Crazy Geniuses.  One is so smart it's scary. They are much smarter than anyone in the room. They are sarcastic, snarky and irreverent. Nothing is sacred. Never ask them a question you really need an answer to because they might not tell you the correct one. And they are very creative. Their speeches and activities push boundaries while fulfilling the requirements. Every day they play word games of their own making with the writing on my white board--erasing letters, changing letters, creating their own little messages to me.  It started small to see if I would notice. Now, they take over the whole board.