September 27, 2014
Last weekend, instead of heading to the lake, my husband and I headed to small town a few miles from my hometown. For the first time since I was in elementary school (well, at least the first one I could get to since then) my mom's family had a family reunion. All of her living siblings and their kids showed up (well, the ones who live in state. We missed the California cousins.) .  It was amazing. It was fun. It brought me back to who I am and where I'm from.

It was the first, but it won't be the last.

At some point in the weeks following, someone always asks, "Are we going to do Don't Be Boring again? "

So we do. Usually several times throughout the semester.

Friday was one of those times

We had such fun watching everyone perform that I don't think she realized that she was the only one they applauded. But she was. The only freshmen in a class mostly full of my contest speech kids. She stood in front of us and flat out told us that she doesn't sing well, but she loves this song. And then she pushed play and began to sing "Let it Go" from Frozen.

And she's right. She doesn't sing well, but what she lacks in pitch, she makes up for in courage, passion and enthusiasm and belief in the song.  She stood in the center of our room and belted out it out.

And when she was finished, they applauded. Not polite claps. Not a smattering throughout the room. But LOUD applause.

I couldn't have been more proud of all of them....

One of my senior speech kids shared a "Where I'm From" poem that she wrote for a college class. She had shared it with me throughout the writing of it. I've taught this student since she was in seventh grade and she's an amazing writer.  She took a simple template and created a heartbreakingly beautiful piece about her mother and her.

The thing about this student is, she NEVER reads her poetry out loud. EVER.  She lets other people read it. She will share the written page. She just has never read it out loud, in her voice.

Ironically, in contest speech, she's does poetry--oral interpretation of poetry. I've convinced her, I think, to use this as her contest piece this year---her senior year. So Friday was the debut of her "Where I'm From". Kids sat there for a minute, shocked that she had written this piece. Her honesty and courage in sharing it will stay with me for awhile.

We took a break and danced with another student. 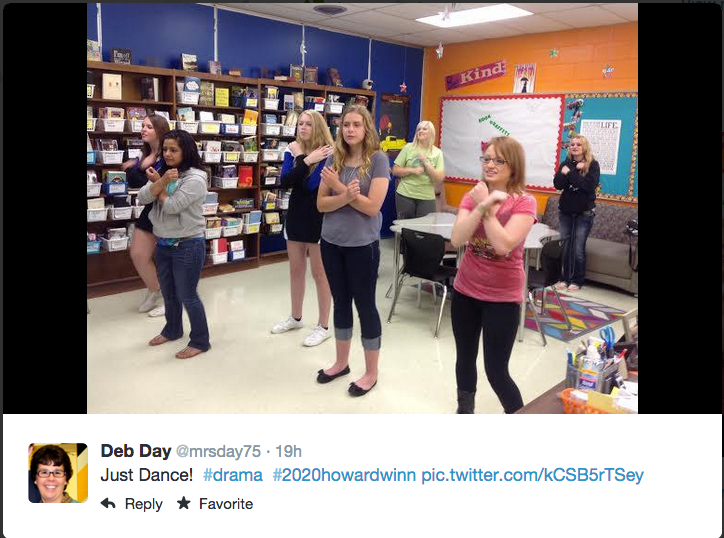 So I guess this week, I'm celebrating family. The one you are born into and the one you create for yourself.

How was your week?